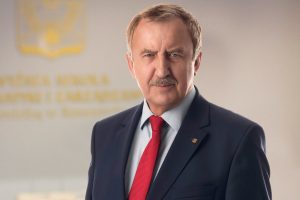 President of UITM in Rzeszów.

Creator and Co-founder of UITM in Rzeszów.

Until 1990, he was mainly involved in research in the field of materials engineering. In the period of 1973 – 1979, he worked in Institute of Non-Ferrous Metals in Gliwice. While working there, he managed the team that solved technological problems related to the production of copper in Glogow II copper smelter. For many years he was a  researcher at the Rzeszów University of Technology, where, among other things, he performed the function of Vice-Rector in the years 1990 – 1993.

Currently, his main area of ​​interest is related to the issues of human resources management, as well as the creation of business-related infrastructure in the field of education, research and consulting.

For many years, he has been involved in activities aimed at creating an effective system of higher education based on the principles of fair competition, initiator of projects of modernization of Polish universities. Author of many publications and expert opinions on the higher education system in Poland. Mainly, thanks to his efforts, students of non-state universities receive scholarships financed from the state budget.

Co-founder of University of Management and Administration in Zamosc and Tischner European University in Krakow. Founder and President of the Association of Entrepreneurship Promotion and co-organizer of its agendas. The originator of many educational and social initiatives, e.g. a network of Business Support Centers and Euro Info Centre. Co- founder of the prestigious publishing house called Copernicus Center Press, initiated by the priest Michał Heller. In the years 1994 – 1996 co-initiator and trainer of the first satellite training in Poland, in the field of company management. In the years 2004-2006 and 2008-2016 the President of the Polish Association of Private Employers in Education of the Lewiatan Confederation.

President Tadeusz Pomianek tries to spend every free moment outdoors because of the fact that he is passionate about communing with nature. His hobby is mushroom picking and making health-enhancing fruit tinctures. What is more, he enjoys visiting palace and park complexes but also exploring civilization processes.

The author of numerous teaching materials in the field of management, human resources management, mainly for postgraduate studies and courses, including:

CONFERENCE MATERIALS ON AN INTERNATIONAL SCALE

Poland and the World (classes in polish)