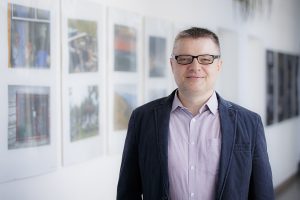 Assistant professor at the Department of Information Systems Applications.

Employed at the University of Information Technology and Management since 2004.

His scientific activity focuses on modeling semantic memory systems in cognitive systems and robot perception systems. He also deals with the issues of data processing from sensory systems and creating representations of the environment by mobile robots.

He has carried out numerous research projects financed by the National Science Center, National Center for Research and Development, and other institutions supporting scientific activity. Currently, he is involved in the implementation of a grant financed by the National Science Center, entitled „Development of effective robot perceptions using motivated learning and self-organizing associative memory”. As part of this project, a control system for a mobile robot is created, based on Motivated Learning. The operation of this system is based on the idea of ​​embodied intelligence. The work carried out is based on the use of image, sound, and distance sensors installed in the robot to create an internal representation of the environment and autonomous decision making (Project website) It is a continuation of an earlier project entitled „Organization of semantic and episodic memory in robot-motivated learning”, under which a cognitive system called MLECOG (Motivated LEarning and COGnition) was developed (Project website).

He is also the tutor of the Science Club of New Programming Technologies. During the classes conducted by the club, students develop their skills related to modern programming technologies, robotics, game design, computer graphics, and other issues that may interest a young computer scientist. Students working in the circle have numerous successes in student competitions and scientific activities related to the implementation of research projects (Profile of the circle in social media).