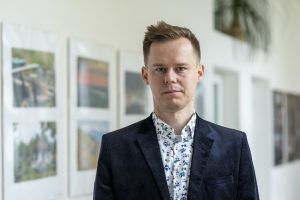 Head of the Department of Biotechnology and Cell Biology.
Employed at the University of Information Technology and Management since 2015.

Education:
2020-2021 – University of Rzeszów, Studies: Biotechnology, Specialty: Molecular Biotechnology (M.Sc.; Thesis title: Effect of tris (2,3-dibromopropyl) isocyanurate (TBC) on the synthesis and secretion of neurosteroids in primary mouse astrocyte cultures)
2020 – Medical University of Lublin, D.Sc. “habilitation” – postdoctoral degree in the field of medical sciences and health sciences in the discipline of medical sciences (date of approval 15/10/2020). Title of the habilitation thesis: The role of the elastin-derived peptide VGVAPG in the nervous system
2015 – Jagiellonian University, Faculty of Biology and Earth Sciences, Ph.D. (doctor of biological sciences in the field of biology), Ph.D. thesis title: The mechanism of action of triclosan in the neurons of the cerebral cortex of mice in in vitro cultures.
2011-2015 Doctoral Studies of the University of Agriculture in Kraków
2010-2011 Jagiellonian University, postgraduate studies: Molecular Biology
2008-2011 University of Agriculture in Krakow, Studies: Applied Biology (B.Sc.; Thesis title: Neurohormonal background of depression)
2007-2009 AGH University of Science and Technology, pedagogical training course
2005-2010 University of Agriculture in Kraków, Studies: Animal Science; Specialty: Animal Breeding (M.Sc.; Thesis title: Oxytocin mRNA expression in sheep adrenal glands during stress and adaptation)

My greatest achievement is the demonstration of the significant influence of the elastin-derived peptide VGVAPG on the function of cells of the nervous system. In a series of 8 publications, I showed that the VGVAPG peptide acts in nervous system cells in a completely different way than in the research models described so far. The effects of the peptide differed in normal cells and in the SH-SYSY neuroblastoma line. In the SH-SY5Y cells (in the undifferentiated stage – a model of neuroblasts), the VGVAPG peptide reduced the rate of cell proliferation in a ROS-dependent manner. However, in normal astrocytes, the studied peptide intensified the process of cell proliferation. The obtained results may explain the decrease in the rate of neurogenesis in the nervous system and the increase in gliosis observed in the elderly. The results of the research suggest that the VGVAPG peptide has a stimulating effect on primary mouse astrocytes in vitro via enhancement of their proliferation. The beneficial effects include the Mmp-2, -9 and Timp-1, -2, -3, -4 expression profile similar to the profile during tissue regeneration, synergistic action with rosiglitazone, lowering the expression of inflammatory markers, and enhancing the proliferation of astrocytes. The demonstrated effects may be involved in tissue regeneration and the formation of glial scar tissue. The conducted experiments showed a significant role of c-Src kinase in signal transduction from EDP to NMDAR and its participation in the influx of Ca2+ ions. The obtained results also suggest the involvement of c-Src kinase in the synthesis of neurosteroids by astrocytes and the proliferation and activation of the Ahr receptor. The importance of EDPs and/or VGVAPG peptide in the nervous system has never been raised.